The original Tiger Lily Winery was first established in Pleasant Valley, California in the mid-1850s. During that century, Tiger Lily became one of the largest and best-known wineries, hailing from the largest wine producing area of its time. Today, we reintroduce the spirit and brand of Tiger Lily. By producing high quality wines from hand-picked estate vineyards, we are carrying on the tradition of hard work and ingenuity that made Tiger Lily a top brand in its time.  The History Of Tiger Lily Wine 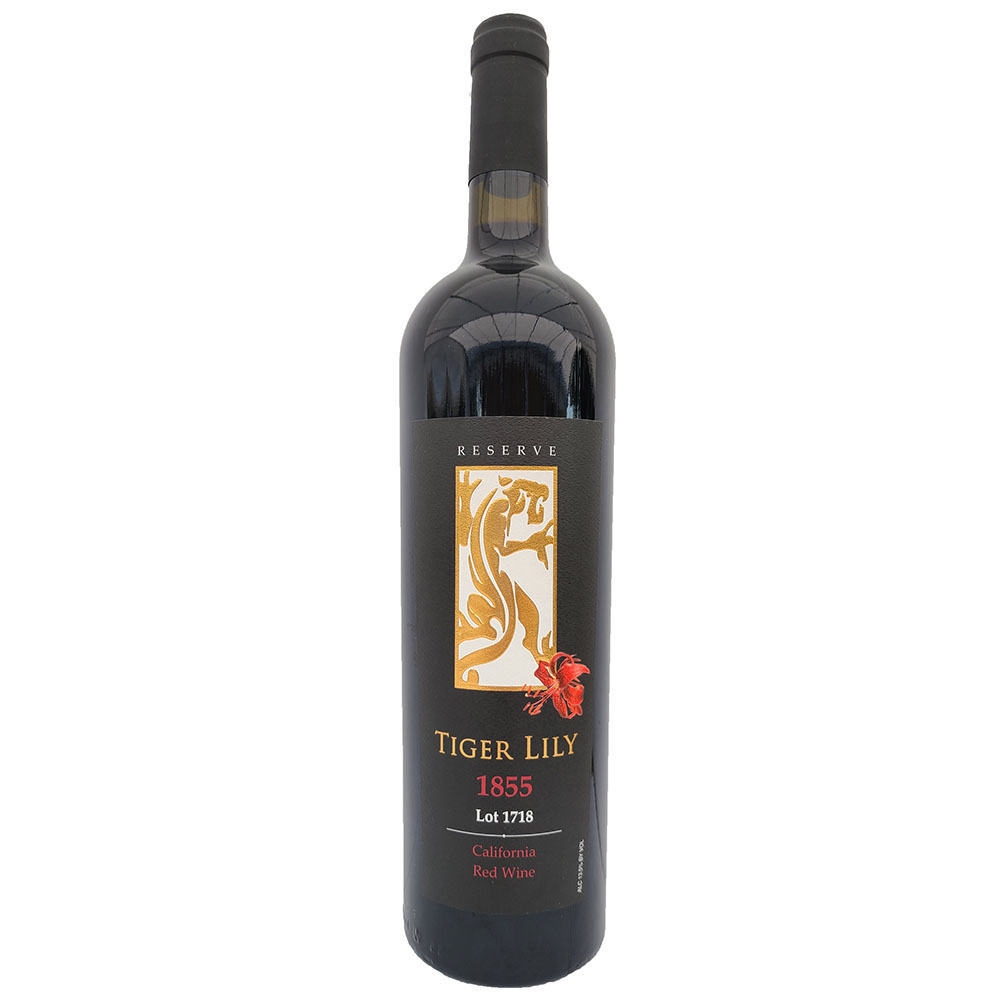 A Bordeaux inspired blend of Cabernet Sauvignon, Cabernet Franc and Merlot that is both luscious and smooth. Aromatics of dark red fruit, molasses, chili pepper and fresh turned soil let you know you are in for a treat. On the palate is full bodied but well balanced with acidity. The long finish will leave you pleasantly satisfied. 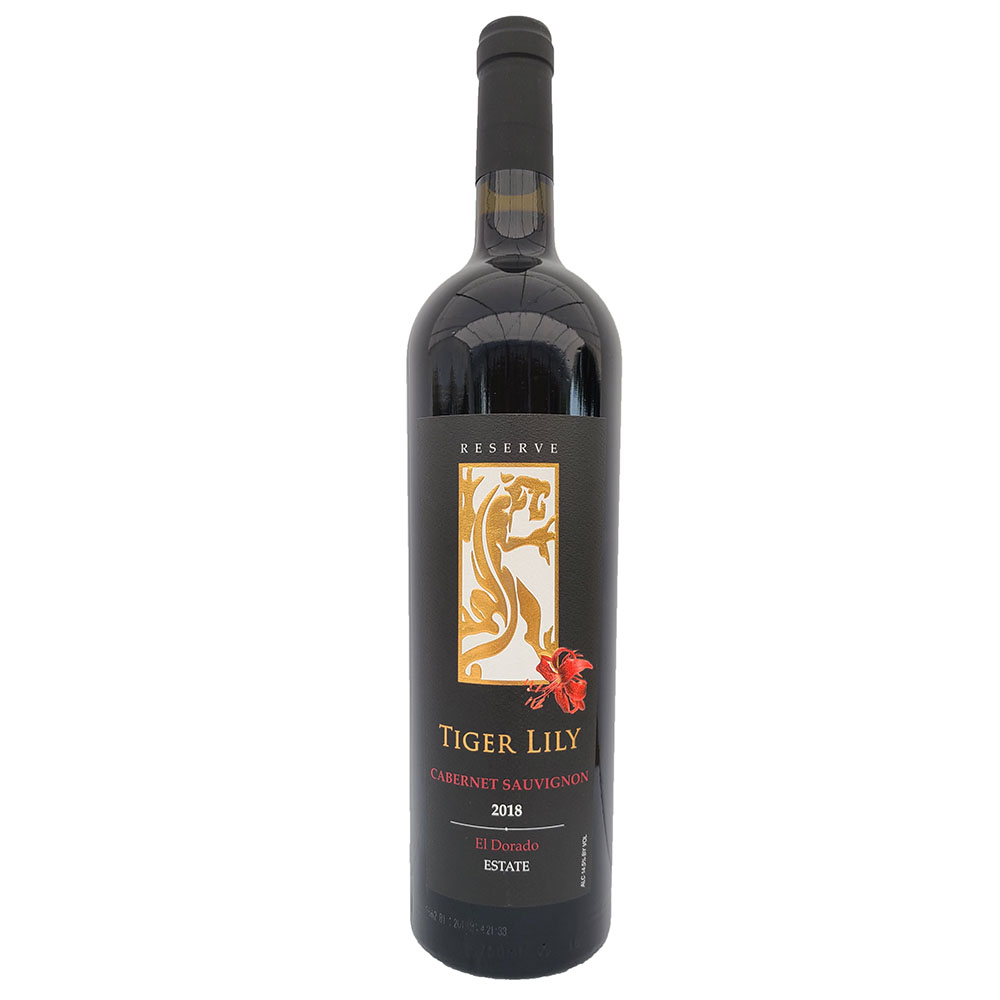 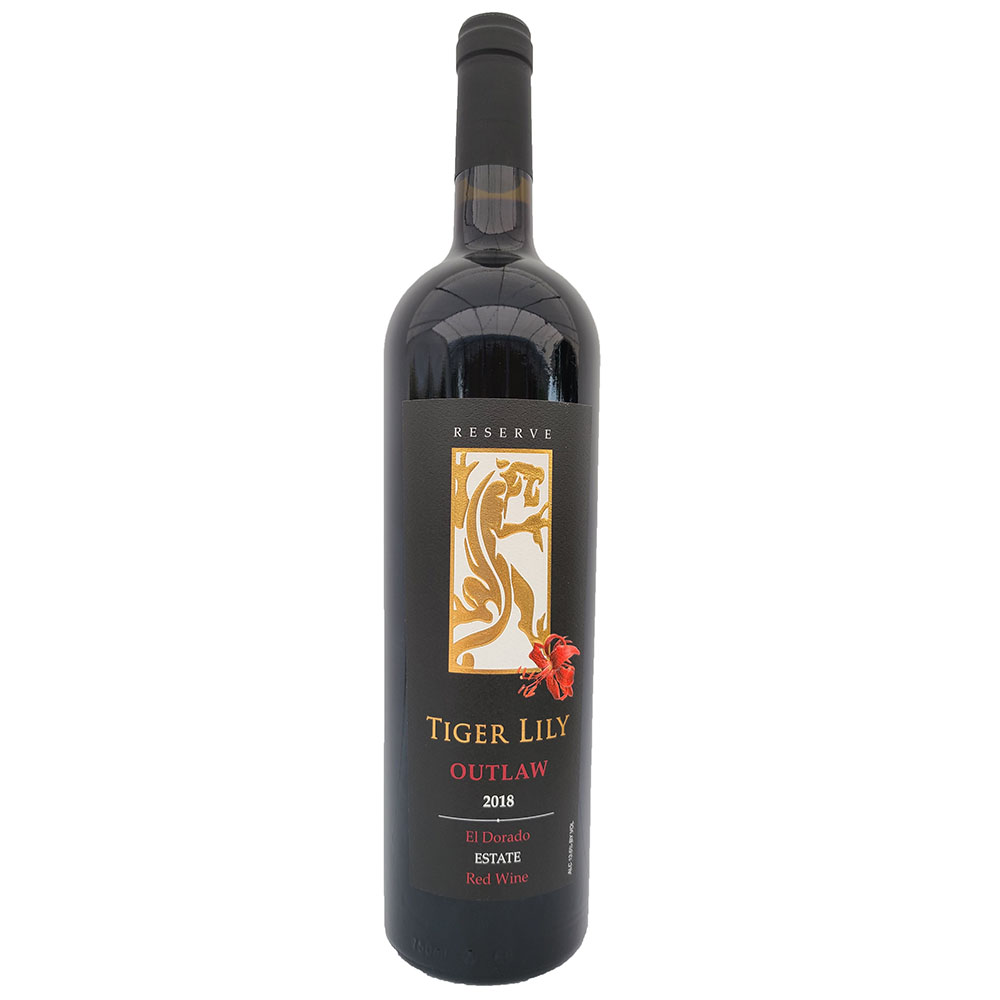 Aromas of pomegranate and currants, along with tropical fruit notes jump from the glass. The great depth of this wine also reveals hints of tobacco leaf, candied fruits and a slight nuttiness. Firm tannins and a full body make for a red blend with excellent aging potential. 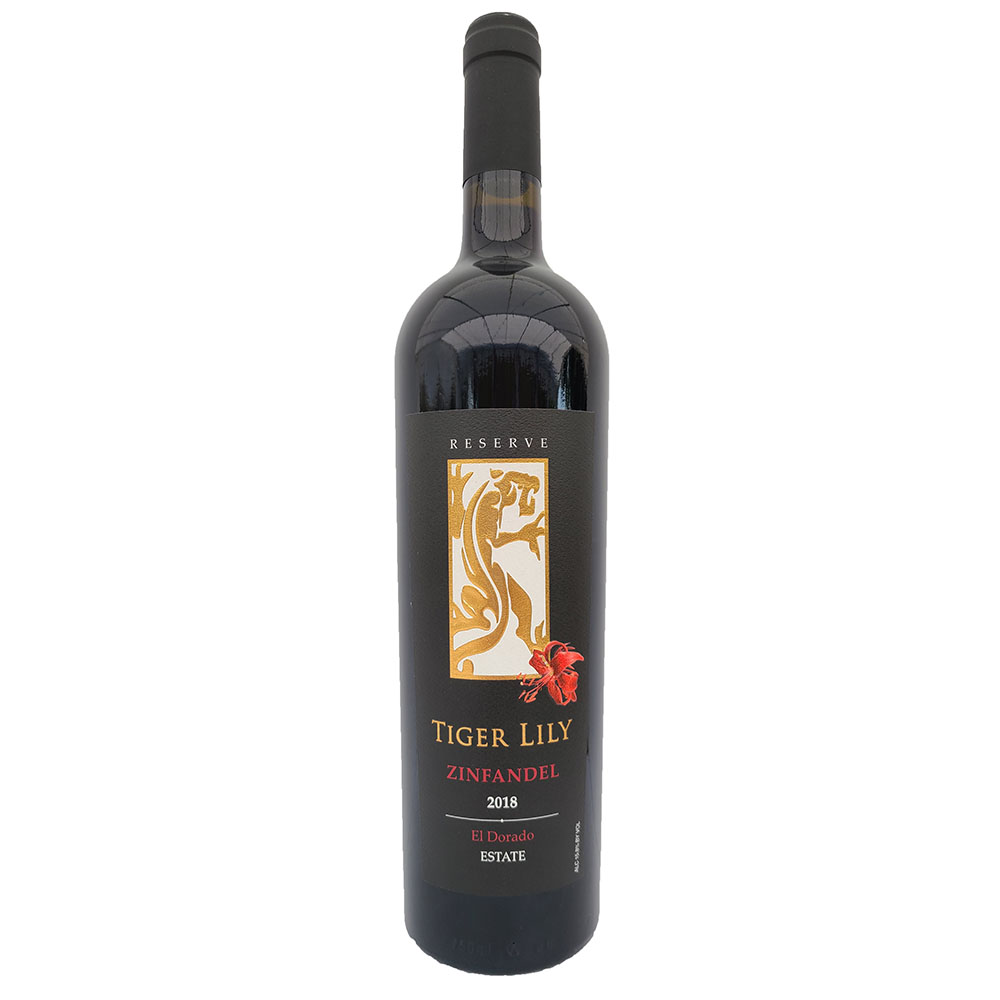 This Tiger Lily Zinfandel opens with aromas of blueberry jam, bramble and floral notes of violets and iris. It is chewy, round and rich on the palate with the jam qualities accompanied by hints of macadamia nut. The wine coats the palate and leaves you with a long, elegant finish. 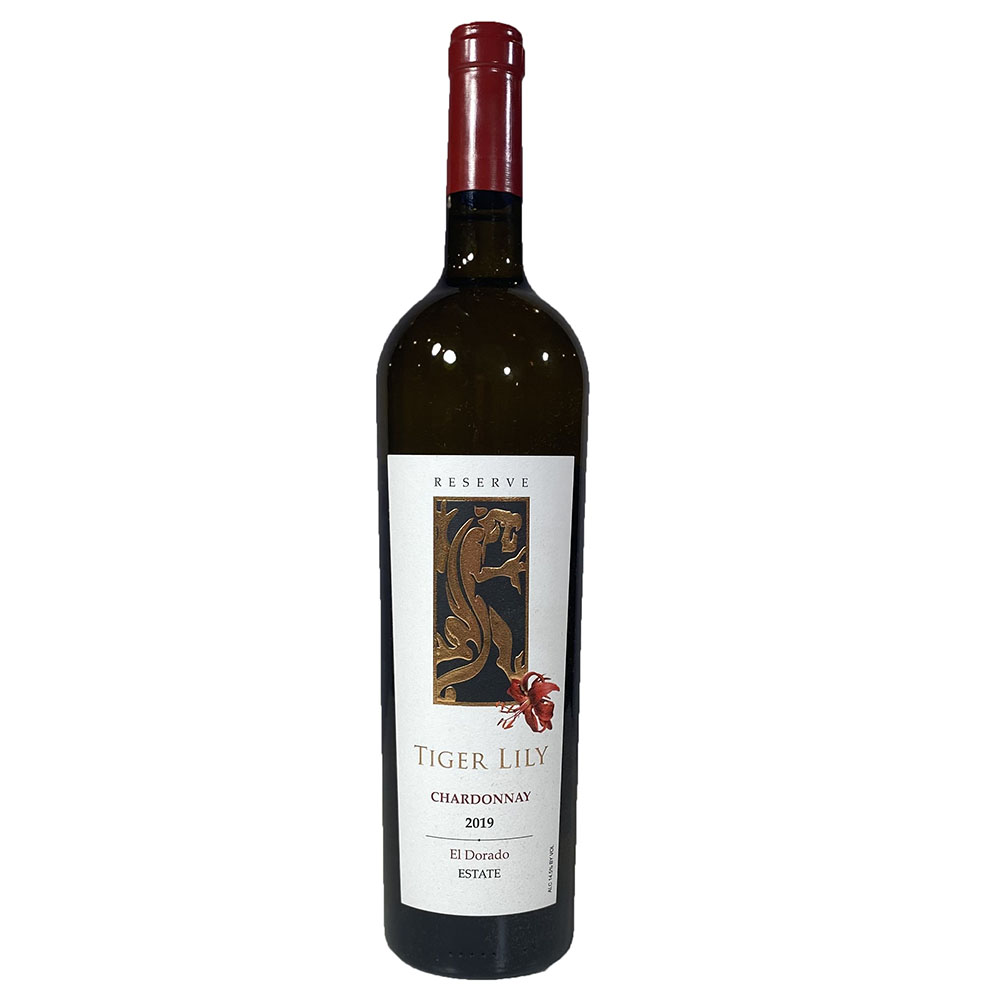 The Tiger Lily Chardonnay is a beautiful lemon gold color in the glass. Delicate yet complex aromas of pear, golden apple, lemon cake, brioche, butterscotch, vanilla and toast jump from the glass. Creamy and rich, without being over the top on either oak or malolactic fermentation, and a wonderfully long finish that lets you savor the flavors.

The History of Tiger Lily Wine

At the end of the Mexican American war in 1848 the Mormon battalion forged the first wagon trail to make their way back to their families in the Salt Lake area from the Pleasant Valley area. The trail connected northern California with many other eastern territories. After the gold discovery in Coloma the trail was used by many gold miners and settlers coming to California hoping to make their fortune. The Pleasant Valley area at the time was originally a Miwok Indian Village named I’Lemo. The first maps labeled the location simply as Mormon Camp and some diaries and maps called it Gold Valley, but by 1854 it was known as Pleasant Valley and had become a huge settlement. By 1854 Pleasant Valley was the first and largest town in the county with a population estimate of 10,000 people.  Among the miners looking to make their fortune were immigrants from Germany, Chile, Poland, China and many other areas. The European immigrants brought grape vine clippings over to the United States with them and when they did not make their fortune in the mines, some turned to making wine as a way to get by.

With so many people migrating to the area, the Sierra Foothills soon became one of the largest wine-producing areas in the whole state. There were many different wineries in El Dorado County at this time but the most popular and one of the largest producing among them was the Tiger Lily Winery. Near the town of Pleasant Valley was an area called Tiger Lily, which got its name from the beautiful meadow of Tiger Lily flowers that grew there. It was located on the south side of Pleasant Valley Rd between Big Cut Road and Oak Hill Road approximately across the street from the current day Saefong Family Strawberry Farm. At the Tiger Lily ranch, they built a Hotel, Winery, and a Sawmill. The ranch included orchards and vineyards irrigated by the Grand Victory Mine Ditch. It was a stagecoach stop in the 1860’s and later a water stop on the Diamond and Caldor Narrow Gauge Railway which transported lumber from Caldor to Diamond Springs from 1904 until 1953. Tiger Lily was even a polling place in 1861.

In the late 1850’s Tiger Lily Winery became the most prominent winery in the area and produced wine from Mission and Catawba grapes. The original Tiger Lily Winery building lasted from 1855 to 1891 when it unfortunately burnt down due to a chimney overheating and catching the roof on fire. The fire caused major damage to the Tiger Lily area and over 5000 gallons (approximately 2100 cases in today’s standard 750mL bottle) of fine wine from the Tiger Lily Winery was lost. However, they were able to rebuild the Tiger Lily Winery and Hotel that same year. By 1893 it was a 28’x38’ house with ten rooms and a double-deck front porch. In 1896 a man named James W. Patton took over as blacksmith and vintner at Tiger Lily. He officially took ownership of the property in 1900 and Tiger Lily continued to make wine and operate until prohibition in the 1920’s.

Discovering Tiger Lily’s deep history Sierra Vista Winery decided to resurrect the Tiger Lily name and spirit in 2006, to showcase El Dorado County’s long history of making wine. We first made a Cabernet Sauvignon, and two red blends called Outlaw which is a Rhone blend and 1855 which is a Bordeaux blend. Our Tiger Lily wines use grapes that are hand-picked from select vineyards and are considered our Reserve line of wine. As we carry on the tradition of hard work and ingenuity that made Tiger Lily a top brand in its time, we are proud to produce wine using the Tiger Lily name and have expanded the wines to include our Tiger Lily Zinfandel, Cabernet Sauvignon, Outlaw, 1855, and coming soon our Tiger Lily Chardonnay.