First planted in 1974, Sierra Vista is one of the oldest Vineyards in the Sierra foothills. We pioneered the way for the modern-day wine business and helped define the foothills as the promising wine growing region, as it is today. Most of our grapes are planted on their own rootstock – not grafted. Own rooted vines produce bolder more intense flavors while also staying true to their varietal without any influence from the grafted roots. Our vines are deeply rooted in perfect soil conditions of a decomposing volcanic soil. Sierra Vista’s prized vineyard and Terroir is the first key in producing our award-winning and delicious wines. 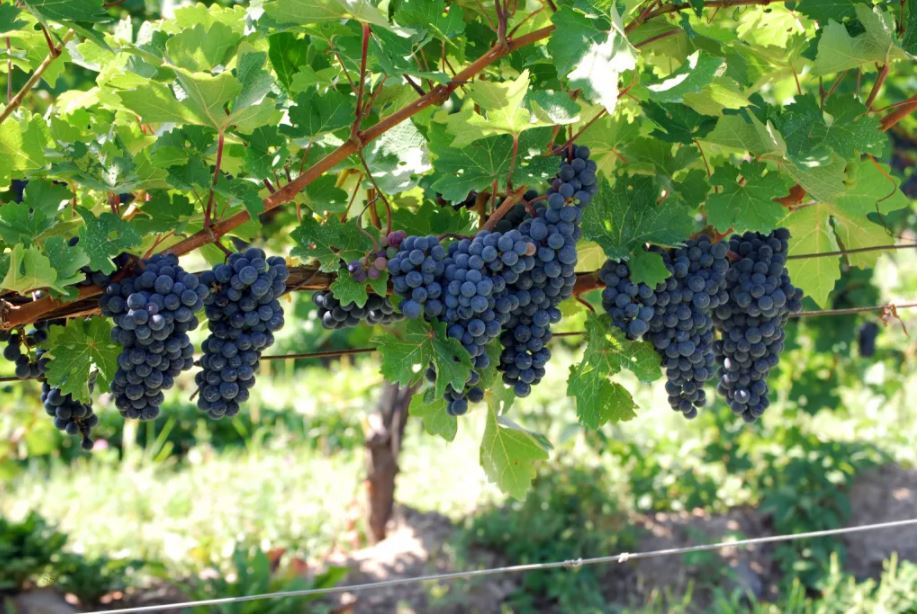 Cabernet Franc is one of the oldest known varietals and is one of the parent varieties to Cabernet Sauvignon. Cabernet Franc is known for its big tannic structure, and its unique spice components. That combined with cherry and berry fruit characters makes it ideal for aging but also has the ability to be enjoyed young! Our Cabernet Franc vineyard is planted on a Western facing slope, and is on a bilateral, vertical shoot position trellising system. One of the unique aspects of our Cabernet Franc vineyard is that it has a high density planting- meaning the vines are spaced closer together to encourage competition, which produces more concentrated and intense flavors in the fruit. Why our location is so perfectly suited for Cab Franc is that it is shielded from the morning sun, but gets afternoon and evening sun, allowing it to come to ripeness at a slower rate. Our 2021 vintage is our first harvest off of this vineyard, and our first ever estate grown Cabernet Franc. This wine is already showing classic true to varietal characteristics- such as dark cherry fruit with lingering spice and tannins that are approachable now, but will greatly improve with time

Planted in 1974, our Cabernet is some of the oldest Cab in the Foothills. A classic Bordeaux varietal, Caber¬net Sauvi¬gnon is known as the King of Red Wine, this full-bodied, dark, concentrated wine is the most popular red wine grape grown on the planet. Cabernet Sauvignon is a natural descendant of the red grape Cabernet Franc and the white grape Sauvignon Blanc. Cabernet Sauvignon is a very small berry – it’s one of the smallest grapes out of the 3000 grape varieties used to make wine. Because of this, there is a greater ratio of skin to pulp than for most other grapes. The skin of Cabernet Sauvignon is thick and deep purple in color. Although it’s not grown extensively in the region, our elevation, climate and soil (terroir’) allow us to grow our Cabernet as if it was in grown in Bordeaux France, remains true to its origin and is very well balanced. Our cabernet is on its own ancient vine rootstock, giving it more intense and bold flavors. 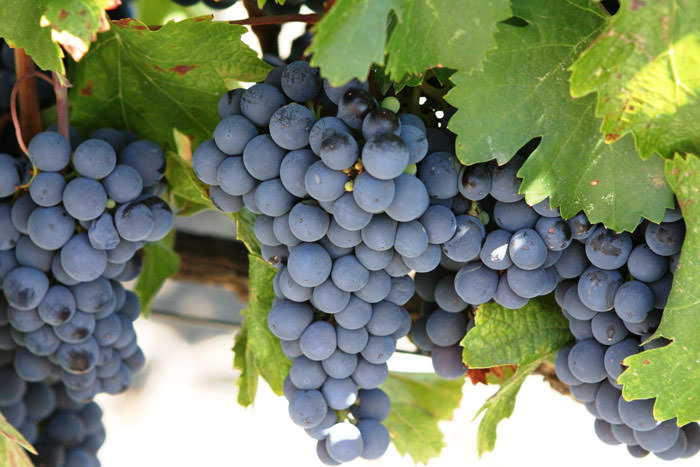 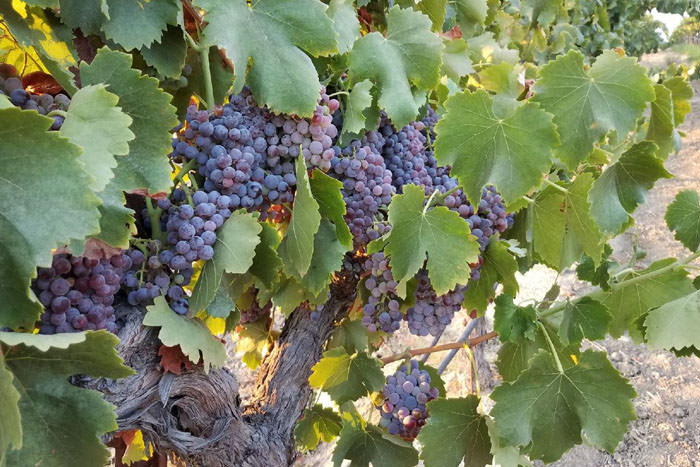 Grenache is a Rhone’ varietal and is responsible for some of the most delicious and expensive wine in the world. It originally hailed from exalted regions like Châteauneuf-du-Pape and is just as important in the wine world as Cabernet Sauvignon. It’s a lighter body, fresh and fruity wine with strawberry, black cherry and raspberry characteristics. We feel our Grenache is some of the best in the foothills.

A classic Bordeaux varietal, our Merlot is grown on the top of the hill at our highest elevation of 2800 feet with excellent airflow through the vines. Sunshine gleams down all day creating a lighter body, full of fruit with a smooth and soft finish. From its fruit-forward flavor to its soft and elegant body, our Merlot will impress connoisseurs as well as be chosen as an option for those just beginning to drink red wines. 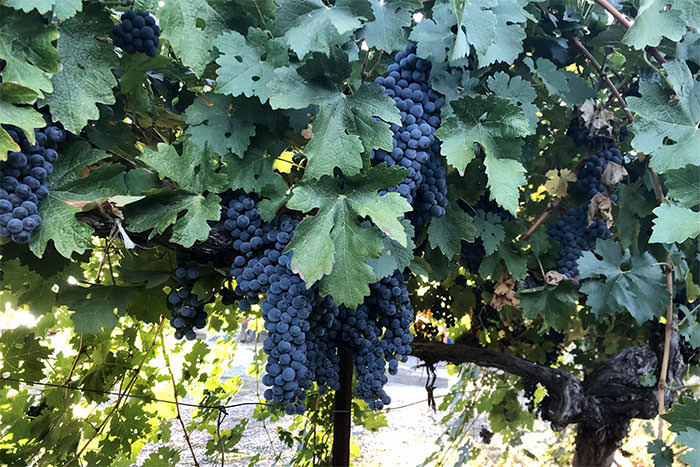 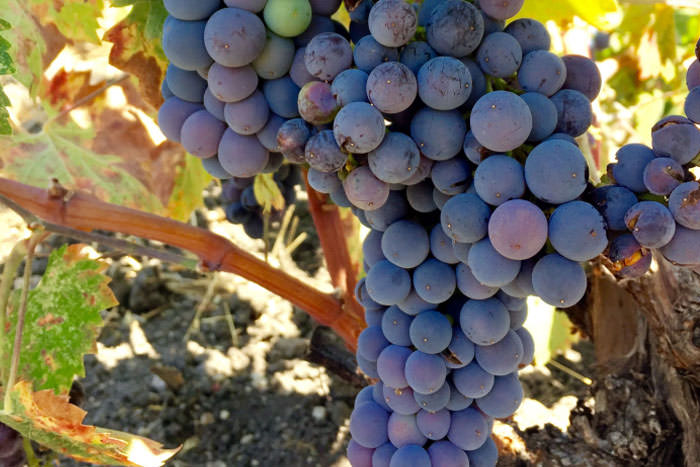 In the southwest of France, Mourvedre is the third most popular grape in the Châteauneuf-du-Pape appellation. Our ¾ acre of Mourvedre is not only used as a blender but is outstanding as a single varietal. Mourvedre is the perfect complement to Grenache and Syrah creating a delicious red GSM blend.
Buy Wine

Our Syrah vines are the oldest in the foothills and one of the oldest in all of California! Syrah originated in the Northern Rhone region of France and is one of the best known and loved wines in the world. But, it’s also one of the most confusing due to its names – Syrah, Sirah or Shiraz based on origin. But our Syrah is genuine with linear traces back to Côte Rôtie  and Hermitage. Its roots are perfectly planted in decomposing granitic soil just as they were in Northern Rhone. Syrah is known as a “workhorse grape” for its ability to combine well with other grapes, including Grenache and Mourvèdre…. also known as a GSM. 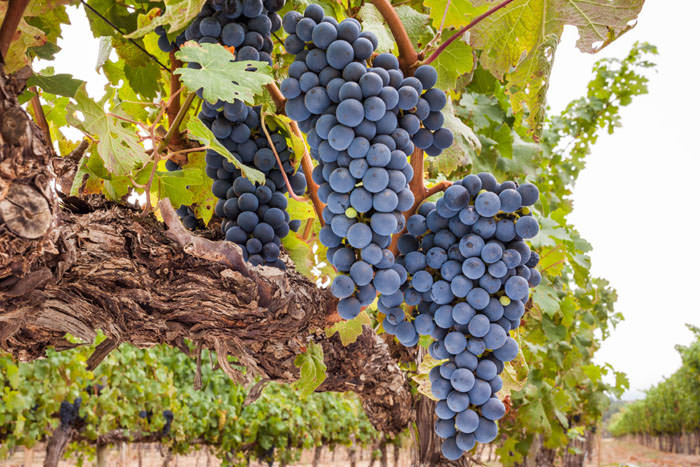 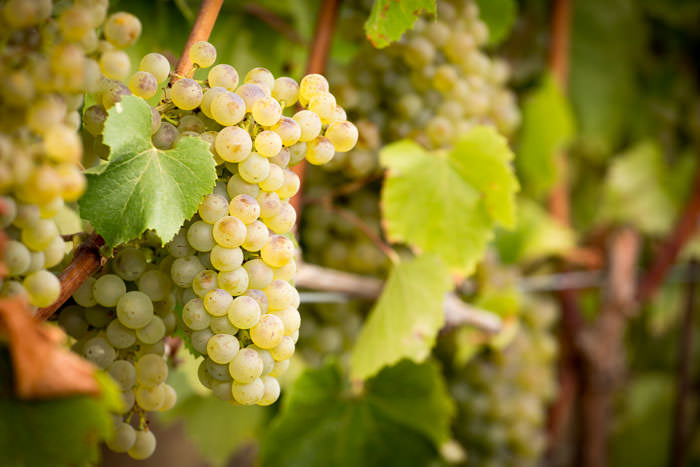 Known as the King grape of Burgundy and the most well know white wine grape in the world, we grow 4 acres of own-rooted Chardonnay. There is not a lot of Chardonnay grown in the region, but again our terroir is perfectly suited to grow this incredibly versatile grape. Our chardonnay produces flavors of tropical fruit along with classic orchard fruit such as apples and pears. We make both an unoaked and barrel-fermented version of Chardonnay. Chardonnay is also widely used for Sparkling wine such as our Blanc to Blanc and Brut.

Picpoul Blanc is a truly unique varietal from the Languedoc-Roussilon region in Southern France. It’s known for its bright acidity and lemon and citrus fruit notes. It pairs wonderfully with seafood, and oysters in particular. Picpoul literally translates as the “stinging of the lips” because of its natural acidity. Our one acre of Picpoul was grafted over from Viognier vines in Spring of 2020. It is on a quadrilateral trellising system with traditional spacing. This vineyard has a subtle North-Easterly facing slope, with deep soils and very good air drainage. This location is ideal for Picpoul because it receives ample amounts of gentle morning sun while later being shaded from the more intense afternoon sun. Our rows are running North-South, to allow for the this optimum amount of Sunlight. This keeps the ripeness level lower and allows the fruit to stay on the vine longer and develop lovely flavors. 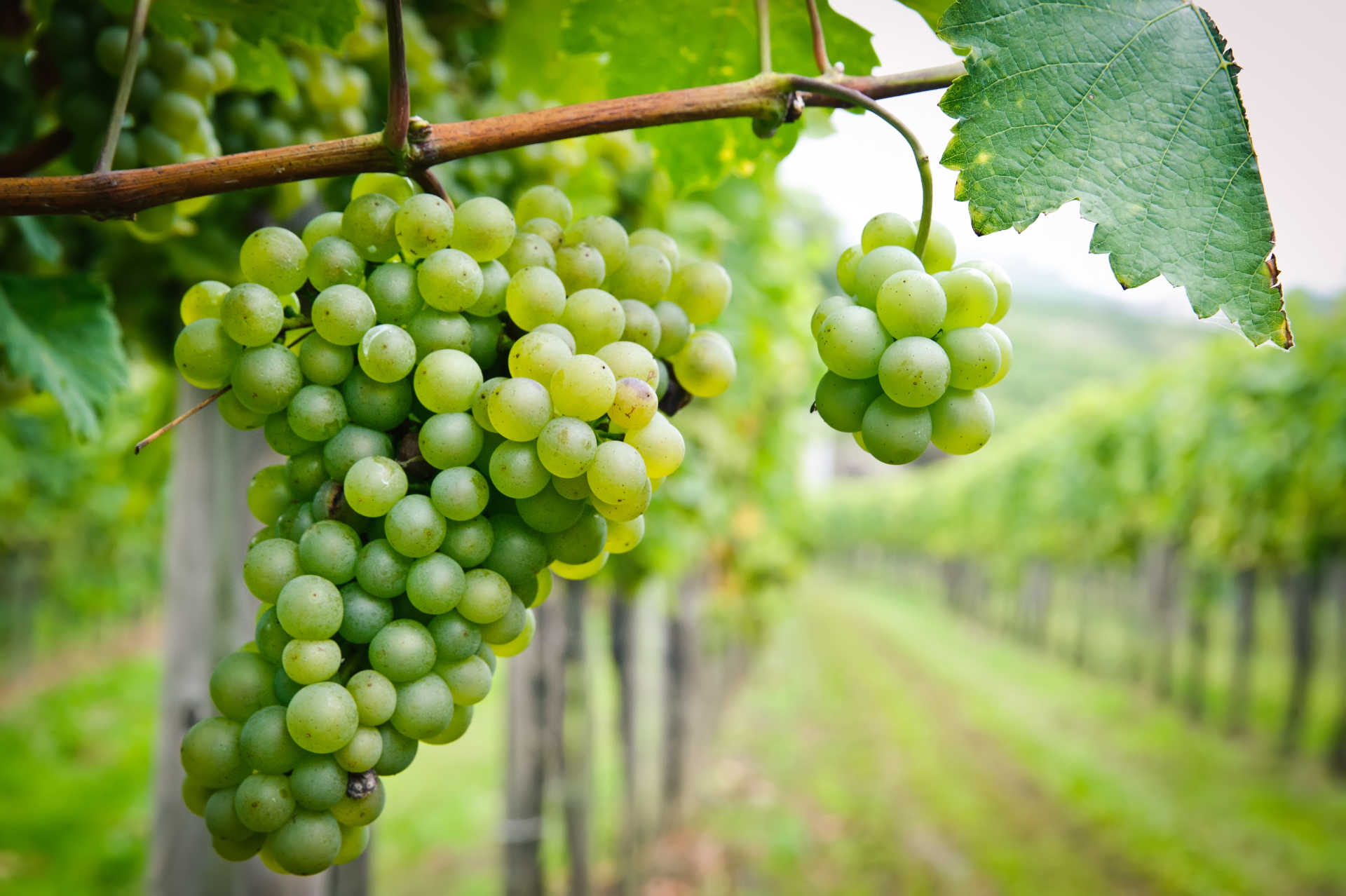 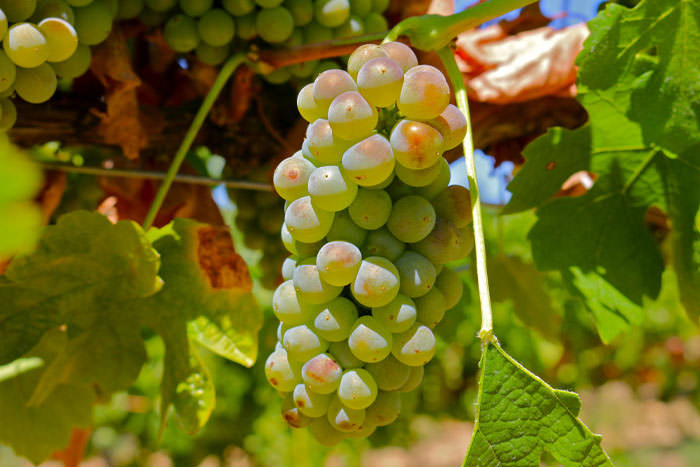 A very important varietal in the Northern Rhone region of France. Roussanne is a key ingredient in the white wine blends of the northern Rhone. Our Roussanne is mineral driven with true varietal honey notes. Roussanne gets its name after its skin color (when ripe), a reddish-gold pigment that equates to the French word roux. Roussanne is typically blended with Marsanne and Viognier. We use our Rousanne as a single varietal and also a wonderful Roussanne/Viognier Blend.

‘Sensuous’ and ‘seductive’ are words that can describe another Rhone varietal grown on our estate. Viognier is known as one of only 4 floral white varietals and our 2.5 acres of viognier on cab rootstock creates big floral notes and a medium viscous mouthfeel. Viognier lovers adore the full-bodied, floral and ripe-fruited characteristics. Frequently in the Rhône, Viognier is blended with Marsanne and Roussanne to create a softer, lighter style. We use our Viognier as a single varietal wine and blend with our estate-grown Rousanne for a delicious white blend. We also occasionally co-fermented with Syrah as done in Côte-Rôtie to help stabilize the color and add perfume to the red wine. 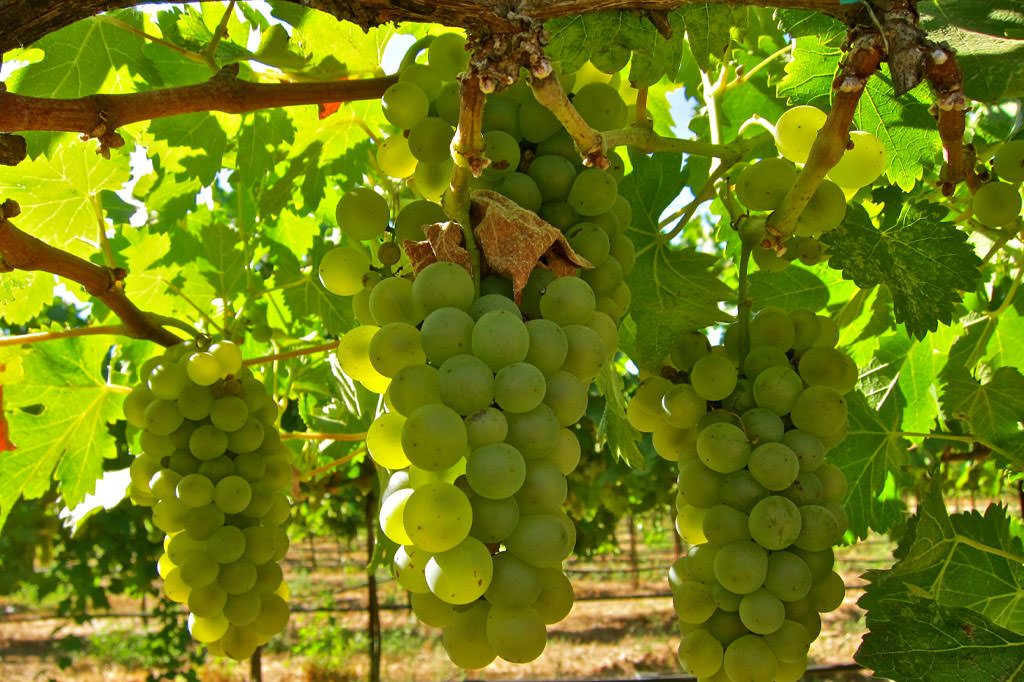 “Great Zinfandels, an excellent Merlot and some Rhone selections such as Grenache and Mourvèdre are what stand out at this winery.”

"Love this sweet winery in the foothills of the Sierra. Lovely shaded trees to sit under and enjoy a picnic lunch with one of the fantastic wines they offer."

“Best find ever! Amazing winery off the beaten path. Perfect place to sit under the trees next to the grape vines.”

“This place is awesome! The wine is amazing and the people serving are too, the grounds are gorgeous, perfect for a day out to sit in the sun and enjoy a glass of wine looking at the beautiful view!”

“Fantastic choice of great wines and very friendly people. They have variety of grapes on estate and make number of great wines. Grenache, Zin, Sira, Cab - all present in the list and all are good.”

“Great for picnics and to enjoy the wonderful people who work here, and the special events that exist for the generous wine club.”

“Sierra Vista is such a beautiful stop! The grounds are beautiful and quaint.”

“Worth a stop. The staff is welcoming and knowledgeable. The wines are solid and approachably priced.”

Keep up to date on the latest wine releases, events and promotions
PLUS get 20% off your next wine purchase.